Following in the success of the comics and the television series Telltale Games has taken the franchise and made it into a game. Telltale is best known for the their episodic adventure games (Sam & Max, Tales of Monkey Island, Back to the Future) and has achieved high levels of acclaim. Is taking The Walking Dead to the video game frontier a good idea or will the series die out before it even gets started.

You play as Lee Everett a convict guilty for killing a state senator. He is riding in the back of a police car until it drives into a walker and crashes off the road. Lee awakens still handcuffed having to learn first hand about the zombie apocalypse. He manages to escape the first hoard and begins to find survivors including a little girl named Clementine whom he decides to protect. He and the survivors have to find out ways to survive the walker threat.

The Walking Dead Episode One plays differently than most Telltale adventure games as it feels more akin to Heavy Rain than something like Sam and Max. Episode one is more plot driven than puzzle driven thus making each chapter feel short. There’s a fair amount of dialogue consisting of dialogue between characters and observations. You are given choices on how to respond to characters and the situations. Most dialogue options are on a timer and if you let the timer expire a choice will be made for you (most often silence).

You are free to move around and explore the current area using your cursor to examine and interact with items, objects and people. There is less of an emphasis on exploration as each area is small and has basic puzzle elements.

There are scripted scenes that require user input. They consist of Quick Time Events where you quickly move the cursor over the required objects or moving away from threats. It is possible for you or others to die if you fail the prompts. 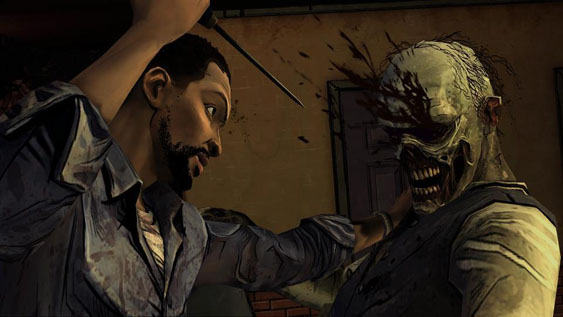 It’s kill or be killed

Throughout the episode there will be a few binary choices that affect how the story will play out. Most of these choices will only affect how people react and respond to your actions while there is one choice that will have a greater impact in the future episodes.

The visuals borrow from the comic books rather than the television series. The art and characters are drawn with heavy lines with a painted look for the colors.

There are some characters from the TV show in Episode One but they do not have the same voice actors. The voice acting isn’t great but it’s adequate to properly characterize the cast. The walkers sound sufficiently like walker.

I am a fan of Telltale and their adventure games. I love the Sam & Max and the Back to the Future episodes, even the Strong Bad episode I played but The Walking Dead is such a departure from those games. The game feels more like Heavy Rain because of the Quick Time Events and the fast pace of the story.

The game follows the theme of comic and the show. The Walking Dead is a zombie apocalypse that is more focused on the people coping in hopeless situations and the De-evolution of human society. The game is set in the early stages of the outbreak and it doesn’t touch on how desperate the situation is. Through conversations you find out more about Lee and the other survivors but most are brief and completely forgettable. Lee’s story is the most interesting and has received the most characterization out of all of the characters but it feels like within the first episode everything about him has been revealed. The dialogue choices gives you the opportunity to have Lee respond how you would like but it suffers because Lee’s personality can become very inconsistent.

The “game” feels more suited to a choose your own adventure interactive comic book. That isn’t necessarily a bad thing. Other than the weak characterization the story it’s well structured and captures the feel of the series. Episode One is $5 and the season pass is $20. Each episode will be released monthly. It’s hard to say to whether Episode One is worth it until the series is complete due it’s length clocking in under two hours even if your taking your time. I do believe that the series is good hands as Telltale has done good work with their writing in the past. They have good material to work with but what they need for each episode to be longer to help create scenes and develop  characters.