In an alternate universe The Joker brainwashed Superman to go on a rampage on Metropolis killing Lois Lane in the process. In a fit of rage Superman kills The Joker and decides to take a harder stance against crime. The One Earth regime is a one ruled by fear followed by most of the Justice League and Teen Titans. Batman of this world, out of desperation, summons the Justice League of another earth to save the world.

Injustice is a 1v1 2D fighting game. You have two health bars but when one is depleted the winner of that round keeps their remaining health and time is not reset. There are three attack buttons (Light, Medium, Heavy), Character Power and Meter Burn. Each character has an array of command normals, combo strings and special moves. Pressing the Heavy button either back, forward or down are the universal commands for wall bounce, overhead and sweep. If you’re knocked down by most moves you can press a button as you hit the ground to roll and stand up quickly. Character Power varies for each character. It gives them an additional ability in a match but some characters receive negative effects as well.

The combat system works similarly to Mortal Kombat except that the block button is removed for the traditional back blocking. Combo strings have to be pressed in a quick sequence even if the character hasn’t started the next move or it will not register. This is important for to know for special moves because if you don’t get a large window to cancel into it. The juggle system increases gravity on the opponent every time they launched into the air. The longer the combo is eventually they will hit the ground but it can be useful in some combos. Combos damage scale according to how many hits are in the combo. It’s important to optimize your combos so you don’t put more effort for less damaging combos.

Players have a super meter that is broken up into four segments. One segment can be used on either enhancing special moves, block escape, or adding one hit of armor on the universal overhead, wall bounce or stage interaction. Two segments can be spent on canceling into the universal overhear or wall bounce. Full meter can be used for a high damage super move. The final application for meter is the clash system. After you lose your first health bar, you can interrupt a combo by pressing the meter burn button and forward. This starts a minigame where both players have to choose how much meter to spend. The player who initiated the clash will gain health if they win. If the recipient wins they deal damage according. The amount dealt is relative to the meter spent and clashes tie if the meter spent was the same.

The Clash of Arrows vs. Mace.

Stage interactions and transitions dangerous tools in a match. Each stage has several interactive objects that can be used to the player’s advantage. Most can be thrown while some can be used for mobility and some can be used to help in combos but it can vary between character classes. Each character has a class: Power, Gadget and Speed. Power characters throw and destroys most objects. Gadget character can plant explosives on objects or reuse them. Speed characters cannot destroy objects but they can leap off them like gadget and do a dive kick off of overhanging objects. Most stages have stage transitions to other areas with more interactive objects. When you hit the universal wall bounce on a certain edge of the stage you can take the fight to a new area dealing heavy damage.

When you complete a match you can gain experience for levels. Levels unlocks decoration for you profile and access cards to unlock new battles, music, artwork, and costumes. Local and online matches have match specific challenges giving bonus experience. Online also has daily challenges worth a lot of experience if completed. Multipliers are earned for win streaks online.

There are several single player modes. Story mode goes through the plot using several members of the cast in matches and the occasional minigame. Battles are a series of matches under certain conditions. There are only a few Battles unlocked at first but the rest are unlocked in the Archives. S.TA.R. Labs are character missions with a minor story. Missions can range from standard matches to matches with strange effects to minigames reflective of the character.

There is local and online multiplayer. Online has several different modes: Ranked, Player, King of the Hill, and Survivor matches. You can join lobbies and message and challenge players. You can create a private game for 1v1, King of the Hill, Survivor and Practice with people on your friends list.

The character designs very detailed with some changes to the costumes. The costumes are reminiscent of Jim Lee’s designs for the New 52 making use of his sharp lines. The Justice League costumes look like armor rather than leather. Most villain designs are very similar to comic designs but a few have nice changes. During a match you can see damage on the character and their costumes but not to the excessive degree as Mortal Kombat. Some costumes that are unlocked through play and a few DLC costumes you will be able to buy. Most characters look great in 3D but some like Wonder Woman. The game is made to look dark and dirty to match the tone that doesn’t work for some characters.

There is a lot of attention to detail in the levels. There are cameos aplenty by characters who didn’t make the cast and the levels reference the most iconic locations from the comics.

Well known voice actors from the animated series and movies such as Kevin Conroy and Tara Strong reprise their roles. Everyone does serviceable work and there are unique dialog exchanges during clashes.

Injustice is a game that discourages mashing. If you want to combo into special moves you have to enter the commands correctly or the move may not come out or be different. Also some strings have to be done unusually fast. Some characters don’t have good wake up special moves so defense becomes even more important. There aren’t abusable teleport attacks like in Mortal Kombat which is good because there isn’t a block button anymore.

Most characters have something cheap that makes them strong but not unbeatable if play you smart and patient. Cross-ups can be very ambiguous and if your character can convert ground combos from it then it becomes a dangerous tool. Some characters are much easier to use than others and feel more like Mortal Kombat characters. It’s strange that some characters like Cyborg, Green Arrow and Sinestro feel like they have to play into their zoning gameplay because their basic combos are either weak or hard to land. I feel the strongest characters will be the ones with strong rush down abilities and mix-up potential. 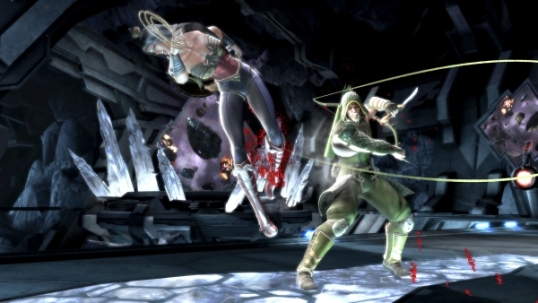 The game does a couple of things that many people will appreciate. The move list contains frame data on start-up, recovery, block and hit advantage. You can also tag combo strings on the screen in practice and singleplayer modes. That’s really helpful when learning a new character. The game is much faster and the characters feel different in movement and play style.

Stage interactions and transitions add strategy to matches but they can be game changing. Power characters get the most benefits from interactive objects. Most thrown objects track opponents, cover most of the screen and hit off the ground too. They also do around 20% damage and there isn’t too much you can do in some situations. They are important to some characters so they can cover space but as an offensive tool it’s a wild card.

The online much better than Mortal Kombat but definitely not the best I’ve seen. The menus take long to retrieve data and matches can take a while to find. Assuming your connection is good, matches are mostly smooth with the occasional hiccup. I don’t like the way Ranked Mode doesn’t show your stats. You can see other player’s records but the only way to see yours is through the leaderboards.

Singleplayer is full of content but that content’s isn’t as interesting as Mortal Kombat’s. The story is a mix of the Justice Lord story line in the cartoon and the Crisis on Two Earths animated movie. Even through Justice League stories are hard to get right, it isn’t good or original. Battles isn’t rewarding enough for the amount of time it takes to complete. I hated the fact that S.T.A.R. Labs used a 3 star ranking system. It makes each mission easy to finish but earn 3 stars can be unbelievably frustrating. I would rather have a non-ranked harder missions to challenge and motivate me.

Injustice is a game that expects skill from the player. It’s easy to be overwhelmed by any character and it could be discouraging to less experienced players. It isn’t hard to learn beginner combos but intermediate and above can be hard by yourself. The single player is fleshed out more than most fighting games but it isn’t as interesting as Mortal Kombat’s. NetherRealms put a lot of work into the game making it fun, unique and faithful to the DC license and anybody serious about fighting games will feel right at home.