The rhythm game genre has seen better days. The rise and fall of the plastic instrument rhythm games left an empty spot in gaming that hasn’t been seen in many years. The genre is kept alive by games like DDR, Rocksmith and the Dance central games; There hasn’t been a rhythm game along the lines Parappa the Rappa, Guitaroo Man or Bust-A-Groove on a major console in a long time. Does Hatsune Miku and her friends have what it takes to revitalize the fun side of the genre?

Who is Hatsune Miku?

Hatsune Miku is the most popular character associated with the voice synthesizer program Vocaloid. The program was designed to allow users to create full songs with lyrics without actual singers. Characters like Miku were created to help sell the software. Eventually the public created videos featuring the Vocaloid characters increasing their popularity.

How does it play?

Project DIVA is a simple rhythm game. On the screen there will be one of the four face buttons (Circle, Square, Triangle or X) and the same symbol will be moving towards it. You have to press the correct button as the note passes the center. Notes are placed all over the screen and spaced to help with timing. Some note  have to be held and released at the correct time. Points are determined by timing and there’s no combo multiplier. Cool and Great timing continues your combo and anything less drops it and decreases your star energy with the exception of Safe timing. Star Notes use the analog sticks and will never be worse than Great when hit. 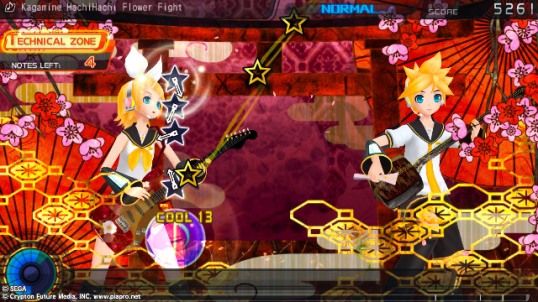 You can choose between 38 different songs between four difficulties. To clear a song you have to earn 80.0 out of 100.0 Grade points by getting Cool and Great timings. Grade Points are represented by a bar at the bottom of the screen during songs and are technically the percentage of notes hit adding up to 89.0. There are two Technical Zones in each song; They are sections where hitting all the notes earns your 3.0 Grade Points each. Chance Time is a larger section of a song where you have to get a percentage of the notes to fill the star gauge. A successful Chance Time earn you 5.0 Grade Points and changes the outcome of the video. If you miss too many notes in a row or get under 80 Grade Points you fail the song. A score of 80.0 Grade Points get you a ranking of STANDARD, 90.0 is GREAT, 95.0 is EXCELLENT and 100.0 is PERFECT.

When you complete a song you earn DIVA Points to spend on costumes, accessories and furniture for each of the Vocaloid’s rooms. You are able to create your own music videos with or without note tracks using your own music. These videos can be uploaded online for other to download and play.

The look of the Vocaloids are what you expect from Japanese designed characters. They all have unique features and voices distinguishing themselves from on another. Each character has several costumes and accessories they can wear during a song. The graphics aren’t great but it fits the anime style. The music videos are sometimes bizarre but are well done with a lot of work and detail put into them. The dance choreography is smooth and look good albeit ridiculous at times. You can even switch the Vocaloid for songs and they will perform just as the same as the original, even singing with their original’s voice.

The game is also aggressively cute.

The videos can be distracting even if you are used to following the notes. Some songs use a lot of bright flashy colors that can be the same color as some of the face buttons. It’s annoying if you miss notes because of it but one you get good there are very few moments where the background becomes distracting.

How does it sound?

Vocaloids don’t sound like people. They aren’t recorded voice but songs created using the Vocaloid program. This has always been the case but if you didn’t know then you may wonder why the voices sound weird. Despite the audible limitations of Vocaloid it does allow for sounds, pitches and speeds impossible by the human voice. Most songs in the game are very good. Mostly consisting of songs from the J-Pop and J-Rock genre they are catchy, memorable and well done.

This is probably the most addicting game’s I’ve played all year. Rhythm games are one of my favorite genres. When the plastic instrument games collapsed on themselves there have been very few rhythm games that interested me. Popular rhythm games like DDR, DJ MAX or Dance Central (which I won’t play) are fun but they lack personality. Theatrhythm Final Fantasy was the only rhythm game I’ve bought since Elite Beat Agents that allowed itself to have fun along the lines of Parappa the Rappa or Space Channel 5.

There’s also an entire song based on Phantasy Star Online.

It takes a while to get use to the timing in the game. It’s best to listen to the song and the rhythm than watching the arrows on the notes. There are times where it feels that you have less leeway for notes than others. It’s hard to pick up the rhythm in some songs because either it isn’t clear or the rhythm the notes follow changes. You can adjust the game for lag but unless you know the amount of milliseconds of lag you have you won’t know if your making the situation worse.

What bugs me the most is that Miku has so many songs while most of the characters only have a handful. Kaito and Meiko only have 2 songs as lead singers and briefly appear in a few other songs.I know that Miku is the most popular but the other Vocaloids must have more songs than. There’s DLC for three additional Vocaloids but they don’t have any songs in the game. I don’t see the point of having characters who are made to sing in a music game where they aren’t.

The Edit Mode is a neat tool but using the Playstation controller for editing sucks (Even for LittleBigPlanet). I gave up on making a track for a 17 second song. It was difficult for me to sync notes because playing the song moves your place in the timeline. I don’t think you can add notes while the song is playing. If you can’t then I have no interest in ever using Edit Mode again. I not bad at this type of thing. I once made a 5 minute track on Stepmania that was well synced. The editor would be much easier on a computer with a mouse and keyboard.

I’m not a music video director so I hardly tried to work on the video part of the song. There are too many options to look through. You can adjust the speed, camera angle, change scenes set dance moves and probably more. I could probably work up something half decent if I knew the ins and outs of the system but I don’t have the time or patience.

If you ever enjoyed any rhythm game be it instrument, motion or controller based then you will enjoy Project DIVA F. The songs are very good but they are all Japanese so if you aren’t already welcome to that kind of music then you have more to consider. This is an overlooked genre and it will be a sad day if the only rhythm games that come out from her on out are karaoke and Dance Central clones.