The sequel to the most fun and interesting skateboarding game in years has come back ready for more. OlliOlli 2: Welcome to Olliwood is bigger, better and more challenging/punishing than ever. Are you ready for the challenge?

The first OlliOlli was a skateboarding game with a new spin on the genre. It felt like a 2D version of EA’s “skate” but simplified with more immediate goals and rewards. The game was very technical and expected a high degree of execution to succeed. Despite its difficulty, the challenges were very doable if you were good enough to make it to the end of the levels. 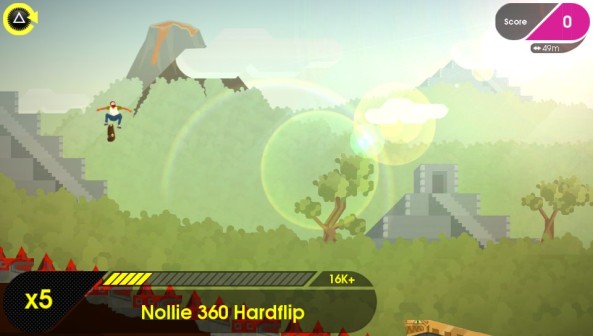 Both games are divided into stages each with 5 levels. Each level is uniquely designed with its own set of skateboarding/platforming challenges and expected very long combos with precise jumps and landings.

The controls only consisted of a few buttons. The motions on the analog stick would dictate you moves, the shoulder buttons would make you spin and modify some moves and you would have to time your button with the main face button. Based on your timing on landing or grinds affected your score significantly.

OlliOlli 2 takes the original concepts and goes even bigger. The level designs are more over the top and creative and generally more difficult to complete. There are few new moves and functions that reduce the amount of downtime during levels and making the game more engaging.

The manual is the game’s biggest edition. Most levels requires manuals to be integrated in order to complete challenges and to have levels be possible to finish in one single long combo. Reverts are a simple landing trick that gives you a slight boost of speed on the ground, increases your score multiplier and can be followed up into a manual to continue your combo. Perfect grinds can be grind switched into any of your other grinds to increase your multiplier and to give you something to do during grinds, especially longer ones. Launch ramps are parts of a level that gives you a boost of speed and launches you high and far into the air, giving the levels a bigger feel than ever.

OlliOlli 2 ditches the original 8-bit look for smoother HD sprites. It’s hard to notice the small details of your character while playing but every trick, movement and bail is incredible detailed and well animated.

The Hollywood theme feels like an excuse to have more interesting level designs and that almost seems designed to kill you, and it’s awesome. The levels are beyond anything seen in the first game and some levels even feel out of this world.

My only gripe with the look of the game is that there isn’t a second skater. It would probably require a huge amount of work but There isn’t even a costume change in the character. Maybe we can get one if there’s another sequel.

How does it sound?

Thankfully, the developers (Roll7) continued to use songs created by talented electronic beat and music creators. This give the game a unique sound that complements the quick and immediate action of the gameplay.

OlliOlli 2 is a game that improves on the original concept greatly making for an even more fun game. Roll7 had a good gauge on how good the player base got and knew how much they could push the players. The game is even more challenging and engaging than the first. The inclusion of manuals is a game changer and almost dares the player to try to beat levels in a single combo.

The game wisely introduces new game mechanics slowly as you get to the new stages. You get five levels to get familiar with the mechanics and then you learn about something new to add to your repertoire. It can be frustrating to wrap your head around all the new mechanics while trying to maintain a combo and remembering good tricks but as you advance in the game and complete challenges they become second nature.

OlliOlli 2: Welcome to Olliwood is currently free for PlayStation Plus users but is only available on the PS4 and PS Vita at the moment. I would expect to see the game reach multiple platforms again like the original but those lucky enough to have a system that can play it are in for a treat. This is a game that demands a high level of execution while still being doable if you simplify the game into something your more comfortable in doing. The game starts challenging but is quite forgiving too and the slow progression in difficulty allows you to build up enough skill to beat anything crazy they start throwing at you near the end. This is a must have game.