After a two week delay the second episode of Life is Strange is out. I had some worries about this game because it didn’t show you any real consequences of your decisions. Does Episode 2 show off the potential of the game’s writing.

Episode 2 takes place a day after Episode 1. Max wakes up in her dorm after a night of trying to learn about time travel and her power to rewind time. Several character threads pick up again including one particular story that isn’t the main focus but persistent throughout. The episode mainly revolves around Max and Chloe and Chloe adopted some of Max’s cheesy dialogue, so that’s super. Chloe mainly wants to play around with Max’s new-found powers but we get a lot of insight and background on Chloe and during the five years Max has been gone. The episode spends more time away from the school and we also learn more about the Prescott family their influence on Arcadia Bay and the impact they have on the townspeople. Many developments occur, setting up the stage for the next three episodes. 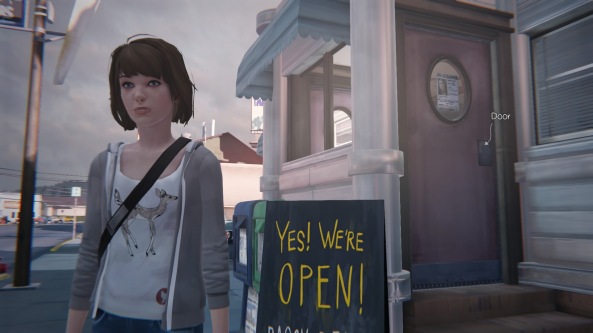 Does not come with two stoners around the corner rapping.

We learn of some limitation of Max’s power the potential for hardships to come and an event that occurs near the end of the episode. This opens huge possibilities in future episodes for Max and the people around her. While the game continues to foreshadow a major event in the game’s final episode that could make everything you’re doing irrelevant, the character interactions and developments have are strong enough that you want to see them through regardless.

We finally see some consequences for decisions in this and the last episodes. The aforementioned final act has a good and bad resolution. Unfortunately, I got the bad resolution. Based on my earlier actions I’m not 100% sure if I could have change what happened.

The final act revolves around a character who’s dealing with their problems much harder than you can see on the surface. The lack of context early on made decisions hard to make so I made conservative and possibly selfish choices when more immediate action may have changed the situation. I was left feeling really guilty even trying to change the outcome a few times but again I’m not sure I could. Ultimately, I had made a choice and hindsight has left me to regret it. Who know what any of the other choices hold this much weight because I am eager to find out.

I don’t want to make comparisons to Telltale’s games but comparisons are inevitable. Telltale’s games after “The Walking Dead Season 1” are starting to have a predictable flow. Their games are well written but revolve around set pieces. You’re told that your choices matter and impact the story but they only really give you variations of scenes and dialogue. The Walking Dead is a good example of how little your choices matter. Most key moments in those games rarely play out in differently unless the people affected are never seen again. Character death is a apart of the overall story but when the game makes you thing you can save a life you probably can’t; If you can then they will probably die fairly soon. You’re always going to make it to the finale regardless of what you do or say. I don’t mean to downplay the strength of the writing of characters and interactions but these hard “no right answer” decisions get easier to make each game you play. It’s way too early to compare Life is Strange to any of Telltale’s games but you can already see the seeds of our action grow. What happens in Episode 2 isn’t the only seed planted either. This feeling that our choices have an effect on the larger narrative is something to look forward to.

Something that I didn’t mention in my Episode 1 review was how much I didn’t like the “adventure game” aspects. Both episodes and bogged down with you trying to find items or solutions to advance the game but what to do or where to find things isn’t always clear. Both episodes I got stuck because what I needed to look for was something that was above the normal camera view and was difficult to notice. Normally I like these little breaks in story but when they stop the game from advancing because you can’t find one little thing then it brings the game to a halt.

Life is Strange is this unraveling box of mysteries and drama that keeps on giving. Cheesy dialogue aside, there’s something very compelling about these characters and their lives. Episode 1 didn’t reveal potential of the story but there is some really good happening here. I don’t know where the rest of the story will take us but Episode 2 shows us what Dontnod Entertainment’s story and choices can achieve. I’m more confident in recommending Life is Strange now than I was before. There are still short comings and the story could take a dip but I’m more hopeful that Life is Strange will become something great.