Peace in Shell City is disrupted when the evil military force, Phantom attacks. The army know that no man is big enough for the job so they call in Tembo, the Badass Elephant. Tembo is an out of action soldier but his size and power is what’s needed to save the day.

He’s seen things back in the day, bad things.

Tembo the Badass Elephant is a 2D platfomer with fast paced sections, light combat and exploration. The game is divided into several levels where you have to save captured citizens and defeat a majority of Phantom’s army to progress to later levels. Phantom soldiers range from lightly armed infantry, automated cannons and robots and manned tanks, helicopters and mechs.

Tembo is agile for and elephant; on top of charging through cars, walls and enemies, Tembo can dive roll a great distance through the air as well as hover briefly by flailing his feet. He can slide under small passages and his size can stun enemies around him when he belly flops. Tembo also stores water in his trunk to use to put out fires that block his path.

Tembo the Badass Elephant has a fairly unique mix of styles. The story is presented in a wordless comic book format. Tembo, civilians and backgrounds are 2D while interactible parts of the level and enemies are 3D. Many of Tembo’s action and/or sound effects are visualized with comic book onomatopoeia.

We start carrying semi-automatics, the buy an elephant…

Tembo is a very well detailed character. He has several fun and unique animations and fits a something a kin to a children’s comic book or cartoon. He’s expressive in his face and his body occasionally can deform for emphasis.

The destruction is detailed, giving you a good feeling as you charge through walls and enemies.

Tembo the Badass Elephant is a game that better in concept than is execution. The game’s good when you’re charging through everything as a nearly unstoppable force. Unfortunately, the game is designed as a modern platformer with controls that hold it back.

The main issues are how slow Tembo is and and how he controls as a platformer character. Tembo’s movement is excrutiating at times which can cause impatience. You instinctively want to charge at everything but you can easily run into enemy attacks. You can be careful and be slow but against some enemies, it’s probably better to get a hit instead of risking several. Impatience can kill you in the air because the dive is the same button as the charge. The dive will send you downwards and pressing down will send you straight down. There are several bottomless pits throughout the game and you can easily send yourself into them by accident. I don’t know why down by itself is an action. Tembo also has a lot of delays in after his actions. After a dive Tembo bounces and after a belly flop and turning he has to return to a neutral animation before he can move. If you act too quickly then you’re stuck in place. This made worse because there are several sections of the game where standing still for too long will get you killed.

All of these frustrations can be compounded by the fact the game wants you to kill everything and look everywhere. Tembo can’t take too many hits, health refills are somewhat sparse and it’s pretty easy to die. You lose everything after the last checkpoint if you die. 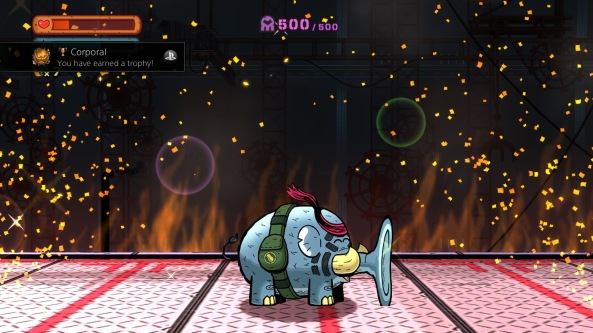 Despite any negative feelings I have about Tembo, he’s still pretty up beat.

This game probably isn’t as hard or as long as I think it was but I had a lot of stupid deaths. Some deaths were from accidentally drop straight into pits, some were from platforming that made you slower and the rest was trying to avoid taking damage but taking more in the process. I just hate how slow Tembo is and that you have to completely stop several times to avoid taking hits.

Tembo the Badass Elephant is a game that would be better served as a runner style game like Rayman Dash The game is pretty fun while your plowing through everything but outside of that puts everything that’s bad about the game on display. The controls aren’t polished enough and the movement is so slow that you might make a lot of mistakes out of sheer impatience. Tembo the Badass Elephant has a good design but the pieces don’t all fit to make a the good modern platformer that it wants to be. You can get enjoyment out of the game but I would wait until a sale comes around first.