END_OF_DOCUMENT_TOKEN_TO_BE_REPLACED

The third installment of Naughty Dog’s Uncharted franchise is finally here. Nathan Drake is back again on another Indiana Jones style adventure exploring ruins and fighting bad guys. While the gameplay has always been fairly average the spectacle, look, feel, writing and characters standout from any other game in the shooter genre. Does Uncharted 3 live up what Uncharted 2 did for the series or will this be a forgotten treasure. 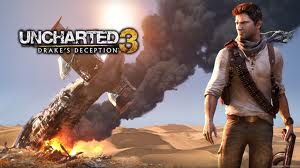 You play as Nathan Drake along with his good friend Victor Sullivan are set to find the Iram of the Pillars the lost city that they believe that Sir Francis Drake discovered and kept secret from the world. The story begins in a bar in England as Drake and Sully attempt to sell Sir Francis Drake’s ring to a shady organization. The two men knowing how to have a good time cause a commotion to draw out the leader Katherine Marlowe who holds the half of key to solving Sir Francis Drake’s secret voyage with the ring being the second half.